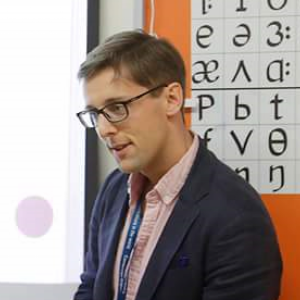 Talk to the expert – Steve Oakes

Steve Oakes is an experienced teacher, teacher trainer and trainer trainer who has worked in numerous countries around the world including the UK, the US and Japan as well as various parts of Central Europe.  He has been the Head of Teacher Training at International House, Budapest since 1997. Steve is also a co-author of Speakout, a general adult course from Pearson.

In the interview we use the following acronyms:

1. From the point of view of an experienced Teacher Trainer, how important is ‘nativeness’ – or lack thereof – for being a good or a bad teacher?

I have never observed any correlation between ‘nativeness’ and the effectiveness of a teacher, and I’m astonished at the persistence of the myth that a native English speaker might be a ‘better’ teacher. When I talk to someone who thinks so and tell them my view, they’re astonished. There’s clearly a massive gap in perceptions, understanding, and experience.

2. What characteristics, then, are in your opinion and experience necessary to become a successful teacher?

A good teacher is dynamic in the sense of not being stuck in a routine but seeking new ways to help students learn effectively. A good teacher constantly tries to gain a better understanding of the language learning process and how it relates to their own practice. A good teacher is a great colleague—supportive and open to support when needed.

I’d add that a good teacher isn’t necessarily the ‘popular’ teacher. Some teachers are well-liked by students because of their personality, because they interact with their students a lot in a social context; I think there’s a place for that sort of persona in a teaching staff, but I wouldn’t want my whole staff to aspire to be like that. Many great teachers are rather quietly effectively, achieving results without the flash that one might identify with the ‘popular’ teacher.

3. If there is no correlation between being a successful teacher and being a NS, why do some recruiters and schools still insist on hiring NESTs?

The main reason that schools advertise for NS teachers is commercial—the market perception tends to be that a NS teacher is better, or more ‘attractive’, whatever the word is. I’ve talked to school directors who state overtly (or vet job applications according to nationality, covertly) and they are quite open about this—that the best way they can distinguish themselves from the competition is to have NESTs, or more NESTs than the other schools. So they see it as a matter of survival, and while I don’t agree with it, I can understand it.

4. It’s interesting that most recruiters are so convinced about this since there is really very little (apart from anecdotal) evidence for students’ preference for NESTs. Having said that, though, do you think that this market demand for NESTs in Hungary could have been caused by bad previous experience with nNESTs?

The observation I’ll make concerns Hungary specifically but may be true of other countries particularly in the region [I think it is true of Poland – M.K.]. I’ll also preface this by saying that this observation is my perspective, i.e. I welcome any contrasting or dissenting perspectives.

Around the time that I came to Hungary, in the early 1990s, the thousands of Russian teachers who were no longer needed to teach Russian were being ‘retrained’ to teach English. That meant learning English to a level where they were competent enough to teach it; in some cases it involved learning a different approach to teaching language than what they’d been practicing up to that point. So, while there were Hungarians teaching English who had an advanced level in the language, the impression was that a large number who didn’t. I don’t think this helped the ‘market’s’ perception of nNESTs, and it took some time before the proportion of English teachers who had an advanced competence in English became prominent in the ‘market’.

So, in the years since then, I’ve seen a veritable explosion in the number of Hungarians teaching English whose competence in the language, as well as their teaching skills (thanks to the growth of effective training here) has meant the NEST vs. nNEST question has lost its relevance. Whereas previously the number of nNESTs on our CELTA and DELTA courses was relatively small, many of our courses are now dominated by Hungarians and other nNESTs. And institutions that formerly showed a strong preference for hiring NESTs-only (and Brits only), such as the British Council, now employ nNESTs in significant numbers simply because they are highly effective, motivating teachers. Yes, many private language schools still try to play the NEST card to attract students, but the momentum against this has become hard to resist.

5. Could it be argued then that by giving equal opportunities to nNESTs and employing the best teachers (regardless of their L1), schools could gain a competitive advantage and reshape the market demand?

Absolutely, though I don’t think it would happen in the blink of an eye—market perceptions are on one hand vulnerable to manipulation but also deeply entrenched. If the local perception is that NESTs are better, and if enough schools are promoting their services on that basis, a school that decides to follow the policy of ‘Not just NESTs, just GREAT teachers’ (there’s a tagline in the making there) will need to show results before the market is convinced. Luckily, THAT shouldn’t be a problem, because the fact is that good teachers (of whatever background) will always get better results than teachers who are classified in any other way (e.g. by nationality).

6. Taking all this into account, if you were responsible for hiring new teachers for the school, how would you go about it?

I have been responsible for hiring new teachers in the past, as acting DOS of IH Budapest during a period when we had no ‘full’ DOS. At the time, while about half of the teaching staff were NESTs, the other half was made up of 5 different nationalities, and this made for a truly rich teaching staff (a real international house). My attitude and ‘line’ was that we don’t employ native speaker teachers, we employ good teachers. I wasn’t under particular pressure (from management) to show preference for NESTs, though at the time IH Budapest still played the NEST card in its marketing.

There are lots of successful teacher trainers who are nNESTs, and at IH Budapest about half of our TT staff are, and I would consider all the TTs here to be at the top of the profession in terms of the sort of training they currently do (I suppose I’m wondering what it means to be a successful teacher training—e.g. does one need to be a big draw at international conferences to be ‘successful’?).

The question though makes me think of one that’s come up a lot in recent years among my coursebook writing colleagues—How many non-native English speaking coursebook writers can you think of, and how many of the major coursebook titles have been (co-)authored by NNSs? If a major coursebook had a recognisably NNS name among its authors, would it sell less well? This is the subject of a whole other conversation, but to me the implication is that the publishers are dealing with the same market perceptions that language schools are, and this affects hiring policy.

8. What message would you give to aspiring teachers who have faced or heard about the issue of discrimination in TEFL?

First of all, I think that aspiring teachers of all nationalities (including NESTs) should be well-informed and be engaged in discussion about discrimination in TEFL. Many novice NESTs (and no doubt some veteran NESTs) assume they are ‘better’, and they need to confront both the roots of this perception and its consequences/ramifications.

On the other hand, all nNESTs should in any case join and use nNEST support groups for just that, support. Having said that, I would emphasise that it’s vital not to develop a victim mentality about the whole thing. Walking around with a black cloud hanging over one’s head will not only help perpetuate the problem but make one a less employable. If successful teachers have one thing in common, it’s positive energy, positive presence.

We often like to think of ELT as an open-minded, nice and tolerant profession. But there us unfortunately a much darker side to it. Native

Teaching EFL vs Teaching ELF (English as a Lingua Franca)

A lot of you are probably familiar with the acronym EFL, or English as a Foreign Language. Some of you probably have heard as well

It was the passport in the first place (‘Uk passport only’ was written in the job requirements), now it’s the name: ‘our students are so narrow-minded that they might not like being taught by a teacher whose name and last name are not English. I’m Italian, why was I supposed to have an English name? does it mean that if my name was Josephine Smith and I were pale, skinny and frekled I could get the job? Last week a former collegue of mine, CELTA qualified teacher, very experienced and passionate one, asked me how to get a job as… Read more »

I’m sorry, in the previous comment I forgot to mention that the name thing was brought up during a job interview for a post as TEFL in a school in Italy by a potential employer.

Hi Jo, Thank you for your comment. Yes, that’s a sadly familiar story, but on the bright side it’s becoming less so, thanks in part to the existence of support groups like this one and to the growing number of non-NESTs who are finding the job they want in the place they want, including in NES environments, and who share their experiences as well as connections. In the case of an employer in the EU advertising along the ‘NESTs only’ line, they need to be informed that among other things it’s illegal to do so. You can do that, and… Read more »

Talk to the expert: interview with Duncan Foord | teflequityadvocates

[…] As can be seen from Oxford House’s website, a lot of their teachers are nNESTs. However, it is commonly assumed by many language schools that in order to be successful, you need to hire NESTs, because this is what the student demand. This stereotype is especially strong in countries such as Spain, Hungary, or Poland, where for many years in the past many local English teachers did not speak very good English. As a result, the word non-native speaker became associated by many students with low quality of teaching. On the other hand, a native speaker guaranteed at least… Read more »

Sorry for replying so late! Yes, that’s actually me! I have taught in Poland (7 years) and Bulgaria (2 years), but I’m currently struggling to get a job in Italy! :/ Thank you very much for your kind reply, Steve, I’ll give my contribution soon to the cause.

#ELT chat summary on whether, or rather how leading ELT organisations should support non-Native English Speaking Teachers’ rights | teflequityadvocates

[…] least about learning languages, while those who know most (click on the hyperlinks for opinions of teacher trainers, linguists and ELT professionals) have been saying for decades: that being a NS has nothing to do […]

[…] should accept what most teacher trainers will tell you: your mother tongue makes you neither a bad nor a good teacher. Like the colour of […]

[…] still hire native speaker teachers? This is no longer a criterion that will ensure success – ask any Celta / Delta trainer. The first prerequisite for a successful teacher should be good awareness of language. Hire and […]